Made It to La Paz 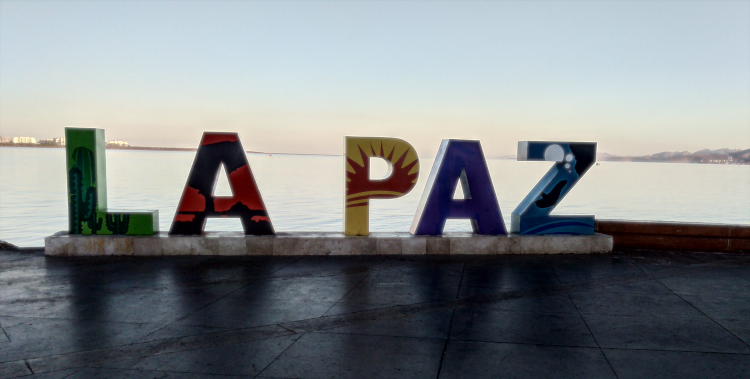 I kind of wish I had waited 15 minutes for the sun to rise a little higher before snapping this shot, but I also sort of like the contrast of the sign against the sea.

Getting from Cabo to La Paz is easier than it sounds, and this is why it's sometimes best to ask around rather than relying on the Internet. My tocallo had suggested going to this shopping mall on the outskirts of Cabo and catching a bus from there instead of taking a shuttle to the airport, then another shuttle from there as would have been proscribed by the Internet.

It saved me about 800 pesos to do it the way I did, and I got to watch The Lion King and the first part of Wonder Woman in Spanish. Well, not really -- I was far too fascinated by the scenery. Coming out of Cabo, you see a lot of cool looking tourist attractions that seem to be not very busy, like a place to ride ATVs which I imagine would be a lot of fun. On the left was the Pacific which looked grand and somewhat foreboding rising out of the otherworldly desert. Occasionally, you'd see a beach hacienda that looked like some kind of scene from Star Trek (the original one, in Technicolor) where Kirk and Spock would go to investigate life and find some odd set of characters and conundrums.

On the other side of the bus was just desert, and that was even more beautiful and other-worldly in its way. Once in a while, there would be a gate, just a gate, with a little dirt road winding off and eventually vanishing into the brush and cacti. Something tells me those are roads best left unexplored. Eventually, the bus swung eastward, and it was all desert for a while. Some kid of about 15 wearing hoodie that said, "F#ck This" went to the front of the bus and asked the driver to let him off in the middle of the desert, at a spot where not even a lonesome gate existed. It was kind of weird.

Finally, we rolled into La Paz, and I must say that the outskirts of town were a bit intimidating. It felt like getting off the bus at one of the first stops into town would be fatal, like the local gangs would just take whatever you had, then eat you for lunch. It reminded me of parts of East New York but even more dangerous; at least in East New York, I'd have chance of making it onto a bus or a subway before becoming a statistic.

As the bus made it further into town, the feeling became much nicer -- soft and lovely and feminine. The neighborhoods were full of flowers and Star Trek-like foliage. For some reason, it made me think of what the funkier neighborhoods of Boulder 20 years ago might have been like if people put forbidding walls and gates around their houses.

La Paz is the seat of the state (Baja del Sur) government and home to one of the world's most well regarded Marine Biology university programs. The waters around here are said to be the second most bio-diverse marine environment in the world after Galapagos. Today having been my first full day, I did not experience any of that. I spent the day getting the lay of the land, renting a bicycle for the week and seeing off my new friend, David, the only other gringo that had been on the bus. He's a truck driver and Iron Man triathlete who is backpacking up Baja on his vacation; really cool guy and kind of an inspiration in that he is incredibly healthy and older than I.

Anyway, while I did enjoy Cabo, it's not entirely my cup of tea. The energy there is intense, and people go there to party. Being offered drugs 20 times every time I went to the beach or wandered about the marina would have been exciting to me 20 years ago, but now it's just kind of depressing. Nobody in La Paz has offered drugs though one shopkeeper did try to interest me in some trinkets from his doorway.

This place suits me, personally, better than Cabo. It's a lot more authentic and is absolutely beautiful with one of the finest seaside promenades I have experienced anywhere in the world. My quest for a bicycle took me into a part of town where I was the only gringo. I'm not even kidding -- literally (in a non-ironic way) the only gringo. It never felt threatening or anything, but it did make me glad that my Spanish is good enough to get around. The "Mass cervaysa pour favor" crowd in Cabo would have been pretty out of their element there.

The hotel where I'm staying was a great choice. It's right on the water, and I insisted that they put me in a nice room with a sea view which they did. Tomorrow will bring new adventures, and I'm DEFINITELY getting in the water for a swim which did not happen today.

It's hard to imagine, but by this time next week, I will be under sail somewhere out there under the stars. That will be (again, non-ironically on either of the next two words) literally awesome*.