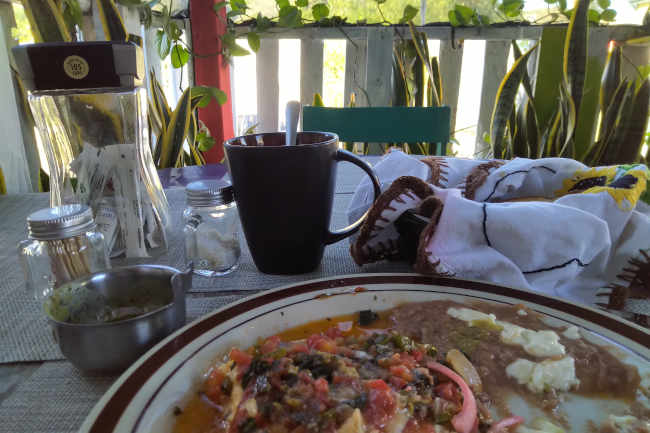 Huevos Rancheros al fresco -- always get away from where tourists hang out for the best food, atmosphere, and value!

When I meet hablantes nativos of Spanish, I usually tell them my name is Charles because it is, and they seem to have trouble pronouncing "Chuck;" it always comes back as a timid "Shuck" or "Chook," with a little question mark in parentheses after they repeat it to be sure they heard right. So if I say, "Mi nombre es Charles," they'll repeat back "SHAR-les(?)" or "CHAR-les(?)" in two distinct syllables, so I say, "Mis amigos Mexicanos me llaman Carlos," which is met with a smile and an enthusiastic, "¡Ah, Carlos! Con mucho gusto."

Today, I was eating breakfast at my favorite spot which is just a hut in somebody's yard a couple blocks from my hotel. They make the best huevos rancheros I've ever tasted, pour a heavenly cup of brew, and only charge me 120 pesos. They also only have two tables so when another guy came in, I invited him to sit with me. We got to talking. His name is Carlos too, and he taught me a new Spanish word. I'm not sure if it's a Mexico-specific thing, but I've never heard it. It's a word that we don't really have in English -- tocallo. It is a nickname you use for someone who has your same name, and it implies a sort of brotherhood. If you're hanging out with your friends, and there are two Carloses in the group, one Carlos would address the other as, "Tocallo," something like "my brother in name."

It's a pretty cool word. This is why it's good to learn other languages; it expands your mind in a way nothing else can, introducing nuance to your thought patterns. I have been thinking along these lines in a general sort of way with regard to emotions lately. It seems to me that emotions run along a spectrum and, like colors, have an infinite number of shades. As we become dumbed down, the range of emotions we experience becomes more limited by our limited vocabularies. Some words change meaning, too, and those emotions are lost in a way. Think of the word "gay." It used to denote a certain kind of happiness. Do we experience gaiety in this day and age? There are synonyms, of course, but do they really capture that particular shade of emotion? Or the word, "awesome" -- do people even know what it means to be awed anymore, just blown away with reverence and fear?

I've developed an exercise recently designed to enrich my emotional life. At various points throughout the day, I will stop and ask myself, "How are you feeling right now?" Generic words like, "happy," "sad," "nervous," "bored," or "angry" are not allowed in response. (Notice how many of the generic words we use for emotions connote negative emotional states and how few indicate positive emotional states. I have to wonder if this is by design.) Dig deep here and find the word closest to what you're really feeling. It's harder than it seems! What happens after just a couple days is that the spectrum of your emotional life becomes much more colorful, and your practical vocabulary probably expands a bit too.

In a couple days, I will go to La Paz where my tocallo lives. It sounds like a tranquil place, and I am feeling optimistic that my experience there will be fulfilling.