Did Carlos Slim Take This Picture? 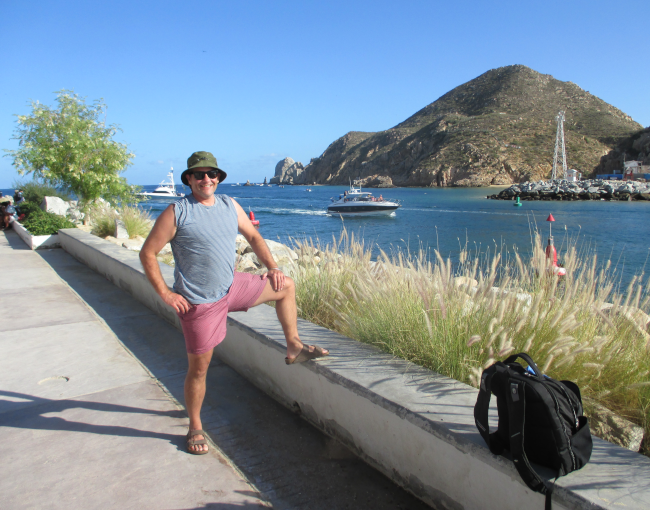 Some Big Kahuna did

Still euphoric from my daily swim in perfectly aquamarine, pristine, cool sea water, I strolled toward town. A few steps ahead, a well heeled senior (tourist, I assumed) directed a dapper (in a Cabo kind of way) young man to take a snapshot. I took the young man for a doorman at a nearby resort/spa, but that turned out to be an incorrect initial assessment.

As the young man handed the phone back to the svelte fellow, I asked the silver-haired one if he would do me the favor of taking the same shot of me. Out of the corner of my eye, I noticed the young fellow who had just taken the photo become tense, as if on high alert. This struck me as doorman doing his job, not letting his guest be bothered by passerby.

The gentleman, for his part, obliged me with a smile, snapped the photo and graciously asked if I'd like a second take after reviewing his work. I took him up on that offer because I had been sticking my gut out on the first take. He took the second shot, teased me gently about my gut, wished me a good day, and went on his way.

That's when I noticed that the three young men whom I had assumed to be doormen moved with him, indiscreetly. Holy shit! That was a security detail! They must have concealed quite an arsenal under those loose, expensive white clothes! Their previous jumpiness when I had approached their charge suddenly made perfect sense. I lit a cigarette and continued to observe, incognito.

This VIP, whoever he was -- it could have been Carlos Slim, whose yacht I recognize from previous photos, is anchored here now -- was, himself, like a grand yacht. The marina hustlers did not offer curios or illicit substances and seemed to not want to even look at him, out of deference or fear I do not know. Yes, he moved like the biggest yacht in the bay, claiming right of way by sheer size and cutting a massive wake.

Or maybe he was "just" a local cartel boss. I don't really know and don't really care. It's all the same to me. Having been a man about town in NYC for the past 15 years, I've rubbed elbows with the rich and famous here and there. They're always cordial and either relieved or a bit taken aback by the fact that I neither know nor care who they are. They're just people who get up, have a cup of coffee and take a dump like the rest of us as far as I'm concerned.

Even so, it's always a bit thrilling to have these little brushes with fame. As a (pretty much) Buddhist, it pains me to admit that it gives my ego a boost to know that I could totally run with that pack if I wanted.

But I don't want to. (The cursor blinked for quite a while here.) I'm not sure why not.

Anyway, if that was Carlos Slim, he seems like a pretty cool guy, and I thank him again for taking the picture.