#WallStreetBets #GameStop and Why I'm Short 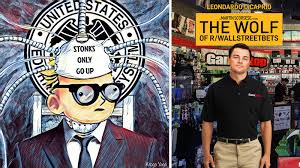 It's so funny that the company is called "GameStop!" If this were a comedy, you'd find it overbearing.

No, I'm not short any of the recently crazed stonks like $GME, $AMC, $BB or $BBBY. I have no idea how that whole mess will turn out so I'm avoiding it like the plague, and I'm not talking about some fake TV plague, I'm talking about the real thing with folks burning their neighbors' houses down so as to not have to deal with the diseased corpses inside. Real plagues are things to be avoided if at all possible, let me tell you.

Personally, I wouldn't touch any of those equities with a 90' crane hook. They could drop to zero almost instantly, or they could run to infinity. Either way, fortunes and savings will be lost. People don't seem to understand that trading is a zero-sum game: every single trade has a winner and a loser. If I sell you a stock that then goes up in value, I lost on that trade, even if I sold at a profit. You see?

Another thing I've found to be true is the old adage, "If you seek revenge, dig two graves." Believe me, I am incredibly frustrated at the stupidity and malice of these financial parasites who provide no value to the world as they greedily suck up all the world's wealth. Nobody is more pissed off than I at the state of the world, and nobody wants to stick it to the Man more than I. My track record backs that. My street cred is unquestionable on that one. My entire life has been dedicated to being the biggest, sharpest thorn in the Man's side that I can possibly be.

But I'm telling you guys, if you're buying up these shaky or even unviable companies at high prices just to stick it to the Man, you're on the losing side of that trade one way or the other.

If the stock goes up 10x, you won't be able to collect your winnings because you will have bankrupted the entire financial system or because -- after years of frozen funds and court proceedings -- some judge will declare GameStop bankrupt and instantly assign a value of one penny to the shares as part of the liquidation proceedings.

That's not likely to happen, though. Remember that every trade has a winner and a loser. If you bought a piece of turd company like GameStop for $200 per share just to stick it to the Man, who do you suppose was on the other side of that trade? Do you really think you won by overpaying? That's right. I know fundamentals aren't your thing, but you vastly overpaid for a turd. When it comes time to cash out and collect your winnings, who do you suppose will be willing to buy your turd and at what price?

I mean, it might get squeezed up to $5000 but at the end of the day, it's still a turd. So dig two graves if you're buying these stocks just to stick it to the Man because if it does end up being a massive black hole of liquidity that sinks everything -- which it might -- you might not like the aftermath of that destruction very much, especially if you were overinvested in stonks, most of which are vastly overvalued now.

Nobody knows how this episode will turn out. I'm short (partially, as a hedge) the market (via $SDS) right now because one thing I do know is that the market is totally dysfunctional at present. The market has one and ONLY ONE JOB: find fair value. It is no longer doing its job. The GameStop nonsense is just a caricature, a grossly exaggerated parody of what is going on throughout the entire system.

I'm also fairly certain that these forced squeezes will end in tears.

As much as I support the Quixotic sentiment of these raids on parasitic hedge funds, I refuse to get involved because I'm too old and tired to dig two graves, especially with the ground frozen solid.

With all that said...

I'll end on a positive note. There are some companies that will do very well over the next few years (Yes, that's what you need to do to be a successful investor -- think many moves ahead, years or even decades. Patience may be a virtue, but it's also damn profitable.) Here's what I'm doing. It's not financial advice. Do your own research. But I'm willing to lay my cards on the table.

In the not-too-distant future, the world will demand a better financial system, a more transparent, fairer financial system with higher efficiency and fewer middlemen. Trusted third parties will not be trusted any longer with good reason. What we need is to VERIFY, DON'T TRUST.

What does that? Oh, why, yes, the blockchain gives us the ability to build such systems. Oh, and look over here! There's a company that has already built such a system which is patented, credentialed, licensed and already in operation! The system is called tZero and the company is Overstock.com ($OSTK). I expect $OSTK to go down in the short term with the rest of the market, but it will be a shining star within the next couple of years.

Another sector I like a lot is hydrogen. In the next few years, I expect that technology to become widely adopted because it solves so many problems. A few companies that I will buy up after the crash with my $SDS winnings will be $PLUG, $FCEL and $BLDP, and I intend to hold those for years, maybe even decades.

So remember, if things go super south in the next couple of months, life will go on. Commerce will march on. Innovation will occur, and wealth will be created.

But in the short term, expect major devastation.