Upon re-reading the Constitution 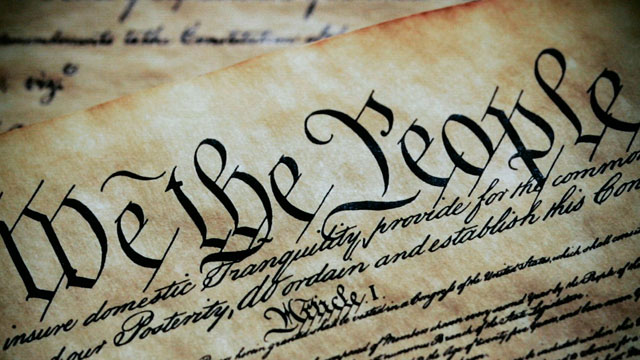 in Order to form a more perfect Union, establish Justice, insure domestic Tranquility, provide for the common defence, promote the general Welfare, and secure the Blessings of Liberty to ourselves and our Posterity, do ordain and establish this Constitution for the United States

...well, the parts related to electing a new president, anyway (Article II, Section 1, Clauses 2 and 3 and the 12th Amendment),

I realized that nowhere is the media mentioned

There is not a word about the president being chosen on a conference call of the oligopoly media companies. Can you imagine!

There's no language in there to the effect of, "The oligarchs shall declare a victor in their glorified blogs and vlogs, and that shall be that." I checked.

The only media outfit of which I am aware that has not called the election is Real Clear Politics which speaks to the integrity of that site.

In my previous blog post I said that Trump should concede, but I’m going to need to do a 180 on that now that so many glaring irregularities have materialized and in light of my re-reading of the Constitution.

The fact is that at the time of this writing, not a single state has certified its election results, and many states are still “in play” due to flagrant shenanigans in their ballot counts. The Constitution makes clear that each state must certify its results independently and describes a process by which — theoretically — if even one state does not certify its results or one state certifies different results than those broadcast on fake news TV (come on, man, you know they’ve told you a bunch of malarkey many many times for at least the past 57 years when they announced that “Lee Harvey Oswald, acting alone, killed JFK.”) — IF EVEN ONE STATE does that — the Constitution will kick in. If Amendment XII comes into play, Trump wins 26-24 by my count because Wyoming’s vote will count just as much as California’s.

Trump should not concede because it sure looks like he won

If the goal is to avoid civil conflict, the optimal outcome would be for the legitimately elected president to occupy the office. The back of my envelope says that Trump may have received upward of 80 million votes (accounting for the jiggering of the counts that went on under the hood of the Dominion voting machines) and in point of actual fact won in a massive landslide.

If you want a civil war, install the guy whose “victory rallies” were about half the size of the average Trump rally that happened three times a day for weeks on end.

I’m not a big fan of Trump, but the fact that he had endless bullshit slung at him for four years — the Russian collusion conspiracy theory, the bogus impeachment proceedings, the fire he took over his handling of the scamdemic — has made me think that he’s at least genuine and not taking orders from the Real Powers That Be (who hate you and me and regard us as their slaves/cattle).

It comes down to the reality of the numbers

Suppose Biden does manage to steal it. The sheer numbers of Trump supporters (at least 80 million by my estimate), the fact that so many of them are armed, and the painfully obvious cheating that occurred can only mean that some of them will fight back, especially when the mandatory injections, severe lockdowns, slave mask mandates (Historically, slaves are often forced to wear masks. This goes back to at least ancient Rome and probably further.) and other tyranny that a Biden administration has promised, well, I can’t see violence NOT happening on a pretty wide scale.

So I’m changing my stance. Trump should NOT concede, at least not yet.

The Constitutional process should play out. If the states certify their elections the way the media seems to think they will, the Electoral College will choose Biden, and Trump should pack his bags at that point.

It looks to me like we’re about to find out just how brilliant our Constitution really is after this mess gets sorted out and Trump wins, as is the will of the people.