The Science Cannot Be Settled 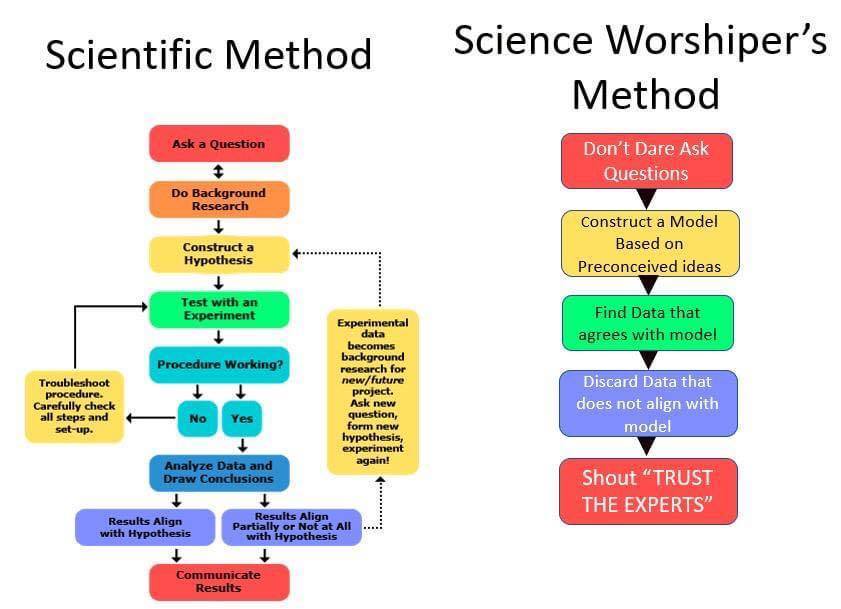 The Scientific Method is about asking questions -- constantly, even questioning established theories -- NOT having answers. Scientism is mental authoritarianism imposed on people who, for whatever reason, have lost the ability to think for themselves.

EDIT: I made a big omission in writing the below. To provide context, I just read this piece by Robert F. Kennedy Jr. and it really made me mad. You should probably read it before reading what I wrote below.

It seems to me we have no time to be dumbshits. 19 years ago (I'm talking of course about 9/11, the last big shock-and-awe psyop that was pulled on the world) we believed a ridiculous fairy tale because we were shocked and awed and frightened out of our skulls. We let them dehumanize us, grope us at airports, spy on us at all times, send us to kill and die in illegal wars, tax us to death to pay for those wars and so on.,

We don't have that luxury this time. If you let them shock and awe you into taking Mr. Gates' shot, you will be condemning yourself to Eternal Hell. You're probably thinking I've gone nutso and thinking along the lines of, "What's the big deal, you lunatic? I take the shot, and I can go back to sportsball events and Taylor Swift concerts. Of course I'm gonna take the shot. Duh."

Oh, wait... about that last part -- you probably knew nothing about that. This other article by RFK Jr. explains it somewhat.

Blood is the seat of the soul.

You will have a choice just like Jesus up on that mountain when the devil was like, "I'll give you the world, Jesus. Just sell your soul!"

And Jesus was like, "Nah, man. I don't need your shittty world."

That will be the choice: Take the shot and go back to the Taylor Swift concerts or don't and roll the dice.

I strongly suggest you be like Jesus and just say no. The Book makes very clear what happens to those who take the deal and choose the lower chakras, the physical seduction: they get cast into the Lake of Fire. They want to die but can't.

Want to know what Hell is like? It's this: you're a person strapped to a pod in the Matrix. You are well aware of this since you chose it. You cannot die because you're melded to the AI machine and being kept artificially alive. Your energy is being fed upon by the AI. By "your energy," I mean your suffering, like the hamburger you ate for dinner tonight if you were lucky. That energy came from a conscious being that suffered for its entire life so you could devour it in the form of a cheeseburger.

That's all I'm saying. But, hey, maybe you want to trust Big Pharma, and Big Media. After all, they've given you so many reasons to trust them over the years. Like weapons of mass destruction or Vioxx, it's not like they've shown you over and over again that they are willing to sacrifice millions of lives and steal trillions of dollars. Just trust them.

The science is settled! Right!

Anybody who says "The science is settled" is a troglodyte who doesn't understand science. The science is never "settled." Science is the opposite of dogma. Science is never settled. Science constantly questions itself. Science deals in theories, not facts, and the validity of a scientific theory is predicated on its being falsifiable. That is literally the basic principle of science.

So the next time some brainwashed member of the Scientism cult tells you "the science is settled," tell them to take a long walk off a short pier.

Anyhoo... we don't have time to be stupid this time. We must learn to say, "Yeah, um, according to science, tens of thousands of tons of steel don't just disintegrate into their own footprint, so fuck your TSA molesting me at the airport, and fuck your wars." In this case it will be more like not taking a shot and not installing an app.

We don't have the luxury of being docile farm animals and going along with it. This is it. This time, they will be doing a lot more than forcing you to take your shoes off at the airport. Take the shot and go to a place where you suffer forever by choice, feeding the Matrix, or say, "Nah brah, I'm good," and have faith.

The Book makes clear which is the correct choice. (Hint: It's not the choice that lets them alter your DNA because "the science is settled (and we have no liability if our injection kills or cripples you)."

The science is never settled. It is always funded, however.