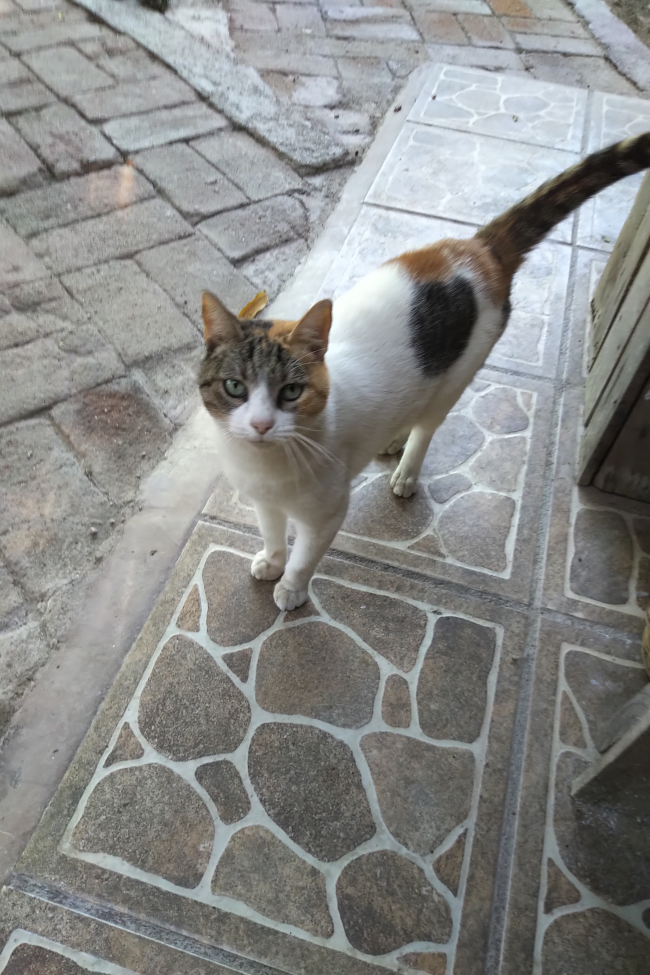 I never did get this cat's name. I'm calling her, "Luna"

You think to yourself, "How can I just pedal my bicycle the beach and lounge about in the warm sun reading, striking up the odd conversation, swimming here and there for exercise and joy when the whole world has gone insane and people are lining up to be probed up the schnoz and eventually injected like farm animals?"

Then you think to yourself, "Why not? Why the bloody hell not? What else have I got to do, and isn't it better than being cooped up in a little apartment to escape the cold, waiting for my injection?"

And of course you have no choice but to agree with yourself at that point, rhetorical though all this may be.

But all that is an aside. Like I said, I don't even know where to begin. My mind feels like it is establishing a connection with the much larger, wiser minds of the whales that I have now seen leaping from the sea far in the distance. I'm getting closer to them but still haven't found the Holy Grail which I feel is a magnificent humpback coming up for air relatively nearby.

Their human counterparts -- sailors and surfers -- are becoming quite familiar to me, though. I love these people, each attaining bliss by harmonizing themselves with the forces of nature. It's something you have to experience. No words can do it justice, but feeling your vessel heel up happily and gain speed or catching that perfect wave are akin to divine deliverance, providing a high no chemical substance could possibly deliver, though sailors and surfers alike share an affinity for cannabis, I've found.

The Baja Peninsula is a surfer's paradise on the west side, and a sailor's paradise on the east. The other day, I took a bus to Todos Santos, a beautiful oasis on the west (Pacific) side of the peninsula famous for being the place where the song "Hotel California" was written. A few miles outside that town, a couple miles down a bumpy dirt road is a surfer's mecca that I will not name because the locals claim it's already too crowded, and I don't want to attract attention to it. It's a place that I know will be developed nad ruined within a decade, but it's still fantastic for now.

There I saw surf such as I have only ever seen on the eastern coast of Sri Lanka in another surfer's mecca that shall remain unnamed out of respect for surfers -- surf that rolls in on gigantic (dare I say, "awesome") 10+ foot swells that curl into tubes and gradually dissipate into the fine sand. I wade into the sea up to my thighs, long after the waves have broken and subsided, and decide to go no further out of respect (and, frankly, fear -- I'm a strong swimmer but not that strong), but these surfers stand up on those waves and disappear into the foamy tubes. It's astounding, surreal and blissful, even just standing there and watching. I can see why people chase that dragon, why they load up the Jeep (or Toyota or VW or whatever) and head south for the winter or forever. It's like the eternal Dead show. That's what those whales live with their humongous brains -- the eternal Dead show.

I'm a sailor, not a surfer, but I have mad respect for those people. As I stood there up to my knees in the flow, awed by the grace and courage of these strange, athletic folk who chase the waves, I complimented a young woman who emerged from the surf a few feet away.

"Nice ride." And it was. I wasn't tryna get over on her -- it was a damn nice ride, and I saw it from beginning to end up close.

We got to gabbing there in the surf, both smiling ear to ear, unmasked, obvi. She had been there for one week. Her name is Karina. She's from Poland. She had pretty much the same story as me -- eff this, it's cold, lockdown bullshit, blah blah, I'm going to Mexico. She had fired off an e-mail asking for a job at the local surf school, had not gotten the job but decided to come anyway and landed the job upon arrival. We both raised our arms, fingers outstretched to the blue sky, surf petering out at our knees, emoting "Freedom!" and she said something so true and inspirational that will stick with me the rest of my life, I'm certain, "Life doesn't happen to me. I make life happen!"

I'm sure she's making like $100 a week if that, but she's happy, she's alive, doing what God put her here to do which is surf for now.

Anyhoo... about the title... There was a point to all this. Where was I going with that thing about dogs and cats?

Did I mention that I was bitten by a big, mangy mutt in Cabo? Kind of funny after my first post from there "Perros y Planes." I was riding my scooter one morning, and a huge shaggy dog the size of a large German Shepherd decided to play a game of chicken with me. I couldn't run it over without dumping the bike, couldn't stop without it attacking me so decided to try and go around it. It nipped me at the base of my butt and ran off with its tail wagging and a smile on its face as if to say, "HaHa! Got ya, gringo!"

I could kind of tell that it didn't have rabies because it wasn't foaming at the mouth or staggering, and it barely broke skin (though I will have a scar) but I went to the doctor anyway. They cleaned it up, asked me to localize el perro, give them an exact location and description of the dog which was kind of scary. A vet would locate the animal, watch it, and let me know within a week if I needed rabies treatment. About a week later, I got the all-clear from the health ministry, but anyway...

So, back to the surfer beach...

After we had enjoyed the beach, my new friends, a couple dudes from Seattle and a couple chicks from Vancouver, and I enjoyed food and beverages -- adult and otherwise -- in a lovely little courtyard. A friendly cat showed up and claimed me, rubbing against my calves under the table. The cat allowed me to scratch its ears and even rub its belly which cats never do unless they trust you to the nth degree.

A murmur of agreement reverberated, then my new friend Dan, a teacher from Seattle, said the second profound thing that I heard that day, "You know, Chuck, people are allowed to be people here too."

That rolled around in my head a few times like an especially sweaty pair of sweatpants in the washing machine. Yes, I've been short changed and paid the "gringo tax" a couple times here, but I have also been overwhelmed with the kindness and generosity of human beings more times than I can count. People are allowed to be people here. Sometimes they nip at you, but I'll take that over boring, lifeless, soulless safety domingo hasta sabado. If you're alive, you should live. Fuck it.

I needed to catch a bus back to La Paz before it got too dark. No Ubers were to be found out here in the desert so I asked the bartender if he could call me a cab.

And he fuckin' did. He drove me to the bus station (which turned out to be a gas station about a half mile up the road) and refused to accept any compensation.

As the bus rolled off into the night, it played in my head:

On a dark desert highway...

... you can check out any time you like, but you can never leave.

Some small part of me will remain there on that unnamed surfer beach forever. Dogs will be dogs. Cats will be cats. Humans will be humans -- for better or for worse but mostly for better. That's the transmission I'm getting from those wise whales out in the sea, anyway.

Where to end? I guess that's as good a spot as any.