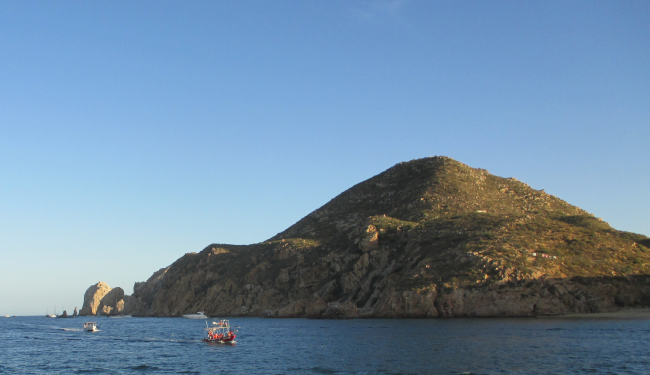 At an Earth power-point at the nexus of the Sea of Cortez and the Pacific Ocean, it would not surprise me one bit if a massive ancient Pyramid lurked beneath this strange little mountain.

The best laid plans of mice and men...

I had the greatest plan in the history of plans. Knowing that jet lag would rouse me from sleep at 4:00 in the morning, I intended to take advantage of the early start to enjoy the sunrise in what is -- in my experience thus far -- one of the most beautiful and powerfully energized spots on this glorious planet, Mt. Solmar in Cabo San Lucas where the mighty Pacific meets the pure and mysterious Mar de Cortez (or Gulf of California for the gringos).

90 minutes of tossing and turning after awakening at what would have been my normal time on the East Coast, I ventured out into the twilit dawn at 5:30, about 50 minutes before the sun would rise, after the bad guys have gone to bed but before the tourists have awakened. A few roosters were beginning to stir and crow (my hotel is a few blocks in from the marina in real Mexico). I could see my goal just a couple kilometers away and walked hastily toward it so that I could greet the sun as it rose from that little mountain that straddles Lover's Beach and Divorce Beach and towers over Cabo's famous arch as if it were about to make love to it.

It would have been a great plan -- perfecto, really -- except for the perros.

As I approached the foot of the mountain, walking through the marina, I asked a fisherman for directions to the trail head.

So much for that. A series of rabies shots doesn't sound like a very good way to spend my time here in Mexico.

So I tried to find a beach upon which to greet the sun. Alas, that plan too was thwarted as I took a wrong turn on the other side of the marina and ended up on the wrong side of all those hideous resorts, trying to find a hole in the wall between them and the beach. I walked a couple miles past the walls and gated entrances, then returned to real Mexico. When I finally did see the sun, it was too high and strong to look at which was disappointing.

Every inch of beach in Mexico is public property, but what good does that do you if you can't get beyond the wall of vacant (in more ways than one) resorts?

The good news is that, because I'm staying in a pretty cool part of town, I was able to get the skinny from two locals and an expat and now know not only the secret rathole to the beach near the marina but a beautiful public beach about five miles out of town to which I will ride my rented scooter tomorrow.

When I finally did get to the beach near the marina today, I looked longingly at the sailboats anchored within a quick dinghy ride and thought, "THAT is the life for me!" It refocused me on my mission here which is to sail away from all this BS.

That plan may be delayed by some version of perros, but I'm more determined than ever to get there.